The first round produced a bit of a shocker with the GX7 pulling out a surprise partial victory in the IBIS battle (read round 1 here).   The higher res EVF and LCD also fell in favor to the Panasonic.  Now, let’s look at the physical build and ergonomic qualities of these two cameras… ROUND 2! 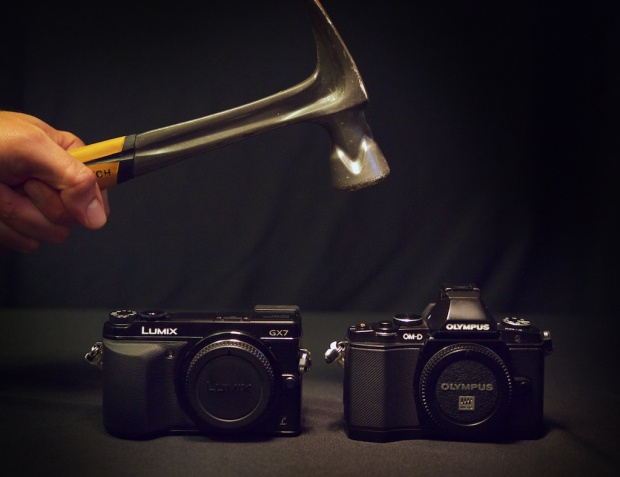 At first feel, there is no doubt that the EM5 is more solid feeling, but when starting to look at some of the physical components, it’s not that clear cut.  The dials and buttons on the GX7 are far more solid, stiff and quality feeling.  The tactile feedback from the buttons is superior on the part of the GX7 as well while the buttons on the EM5 are mushy, and loose feeling by comparison.  Both cameras have plastic buttons and knurled metal knobs, with one plastic knob on the Panny on the back akin to most other GF and GX model cameras.  The GX7’s knobs, I feel, will not accidentally get changed slipping into or out of a bag or pocket while I’ve had that problem plenty of times with the looser knobs on the EM5.  I’d also heard a few instances where the EM5 knobs came off, and when felt you can notice a bit of give, or the ability to rock them, which I’ve also heard was due to the rubberized gaskets (enviro sealing) and may be the culprit.  To be fair, I’ve not had mine fall off, and as far as the GX7, mine is still only a little over a month old, so wear and tear may provide a different reality down the road.  The eye piece (eye cup) is another area where the GX7 wins (physical quality-wise) as it does not feel as if it will accidentally get pulled off where that has happened many, many times with the eye piece on the EM5.  The bizarre two piece plug/hotshoe cover for the EM5 seems like a poor afterthought as well, and I wondered from the get why they didn’t copy the combo hotshoe plug akin to the GX1 or similar cameras.  That said, assuming you don’t lose any of the little pieces, and don’t end up with the screen bevel crack that became very common for the EM5, it is weather sealed, and sealed pretty well.  The EM5 also feels like you could *almost* hammer a nail with it.  The GX7 can’t really enter into the environmental sealing conversation, so while I do feel that the GX7 is put together better as far as interactive components, with a higher level of tactile quality, the EM5 wins for solidity and environmental resistance.

A camera in the hand is worth two on the blog.  The micro 4/3 system has done so much to decrease the size of camera bodies in the past, and has now started to realize that a little bit of bulk isn’t a bad thing if put in the right places.  The “grip” on the EM5 never suited me or my hands leading me to invest $125 in a Really Right Stuff accessory grip and body plate (which I do love, read here for more on the RRS grip).  The GX7 grip is substantial without being a burden, size-wise.  I feel it is the best grip that a compact micro 4/3 body has yet provided (not considering the GH3 or EM1 here), and for that, the GX7 is far better in the hand in my opinion.  One issue that I outlined in my review of the GX7 is that the Display button falls directly under my (admittedly large) thumb which has me unintentionally changing the LCD layout every once in a while.  Very annoying, but I’ve started to adjust my grip to avoid it.  Still I wish that Panasonic would have taken this design flaw into account and moved that button as there is very little space on the backs of these cameras to grip them from.  While the EM5’s button layout and back panel is more crowded, it does have a very handy thumb rest which helps avoid (not entirely) inadvertent button pushes.  The bigger problem regarding the buttons on the EM5 is that they’re very mushy and often require a couple pushes to get them to respond.  This is tricky in that a couple functions require a slighter button tap vs a full on push and hold (cycling between the green focus box and the ability to magnify the manual focus area for instance) and the mushiness doesn’t play well with this needed level of sensitivity.  The GX7 by comparison has a very decisive and audible (albeit slight) click when buttons are pushed.

The GX7 is also easier for me to control one handed.  Not something that I tend to do often, but being able to firmly plant the camera in my palm while gripping it with my middle and ring fingers while the index finger rests nicely on the shutter button, I can more easily pull my thumb off to depress buttons, or quickly switch between AF and MF via the cool toggle when needing to one hand it.  Aside from the DISP button, I think the GX7’s button layout is very nice and intuitive, allowing shooters to adjust settings very easily, and once familiar, without needing to look at the back of the camera, something that I’ve always struggled with on the EM5.

Ignoring the lens release buttons on both cameras, here are how they add up with the external controls:

The GX7 has a total of 15 operational buttons (including the shutter and the thumb wheel which doubles as a button) and 3 spinning dials (mode dial and two adjustment dials).  It also has 3 switches, the MF/AF switch which surrounds the AF/AE Lock button, the on/off switch and the switch to initiate the included flash (which I like having quite a bit).

The EM5 has a total of 13 operational buttons (including the shutter button), 3 dials (mode, and two adjustment dials) and one switch in the power toggle (on/off).

While numerically speaking, the GX7 has more buttons and switches, it does a very good job at not over crowding the camera itself all while adding very handy operability by way of these direct access controls.  The dual purpose thumb wheel is well designed and the incorporation of the MF/AF switch surrounding the handy AF/AE Lock button is also a great addition.

Having the EVF centered on the EM5 versus off to the top left corner on the GX7 provides another ergonomic design difference.  While I feel the EVFs are both quality with their own ups and downs, after getting used to having it off to the side, I now prefer the design of the EVF on the GX7, and it slims the profile down allowing the camera to more easily fit in bags, pockets, etc (and avoids the damn eyecup from getting ripped off when trying to dig it out of the bag).  I have traditionally favored my left eye when viewing through a viewfinder because it is better than my right eye.  When using either eye on the EM5, my nose is pressed firmly against the screen.  Not a big deal, but nose grease isn’t fun to have to try and wipe constantly.  When using my left eye on the GX7, I can use the very handy tilt function to tilt the EVF up by a very slight amount (I’d say 15 degrees) which keeps my face off the back of the camera, and more closely centers the lens axis between my eyes.  When using my right eye, it removes my face entirely, and I’ve even been enjoying keeping the left eye open while viewing the EVF through the right eye which allows me to see around the framing, enabling me to anticipate and adjust for subjects outside of the frame more easily and seamlessly.  It also makes me feel like an advanced cyborg which really plays to my juvenile sense of wonderment and simplemindedness.  It has taken some getting used to shooting either of these two ways with the EVF off center, but I have learned to appreciate and even prefer it now with smaller cameras like this.

This round is a draw for me with the overall robustness going to the weather sealed and solid EM5, while the ergonomic edge goes to the GX7.  The final round will determine which sensor, the current 15.9mp Sony or the new 15.8mp Panasonic can claim to be the better of the two.  I’ll also be looking at interface and unique features between these two.  Follow on Facebook or Twitter to see how this all ends up, or add your email to the top right of this very page.

If you missed round 1 which tackled the 5 axis vs 2 axis IBIS, EVF’s and LCD Screens, you can read through here: GX7 vs EM5, Round 1

You can see both cameras (or kits) via my affiliate B&H links below.  Currently, the newly offered GX7 kits including the 20mm lens are on sale for $200 off!

Thank you as always for the read.  Please feel free to fire off any comments, criticisms or questions below and I’ll be happy to respond.

34 thoughts on “*The GX7 vs the OM-D E-M5, battle for my affection, Round 2 – Build Quality and Ergonomics”